Mulethi sticks given to a coughing child, has been a remedy of grandmothers through the ages.  And today the world is waking up to the vast benefits that Mulethi or Licorice has to offer. A perennial herb that is indigenous to parts of Europe and Asia has been used for centuries in Ayurveda and Chinese medicine as an expectorant.  It is widely used in the western world as a flavouring agent due to the natural sweetness of licorice extract; it is used to flavour candies, tobacco, and alcohol, artificial and natural sweeteners.Today studies on glycyrrhizin (a saponin responsible for the sweetness of licorice) have shown promising results in the treatment of many health conditions. 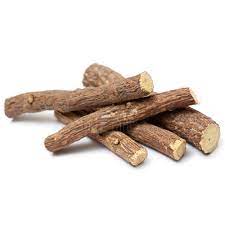 Other Names for Licorice

HEALTH BENEFITS or uses  OF MULETHI

So here are some benefits of mulethi, and ways to use it.

Daily use of Mulethi is known to boost immunity. The enzymes present in the roots of Licorice plant, help the body produce lymphocytes and macrophages which are the body’s natural defense against microbes, pollutants, allergens and cells which cause autoimmune diseases. Crush 10 grams dried roots of licorice plant and mix with 200 grams tea leaves, use this mix to make your everyday chai.

Anti-oxidants present in licorice root are responsible for dilating blood vessels, avoid accumulation of plaque in arteries and veins, and regulate the quantity of fat in the blood.  Drink mulethi tea everyday to reap its benefits. Boil 10 grams of dried root in 300ml of hot water for 15 minutes to prepare this mixture.

Chewing on mulethi sticks is an age old remedy for sore throat. Its expectorant and bronchodilator properties help with conditions like whooping cough, asthma, dry cough and bronchitis. Mix ½ teaspoon ginger juice to mulethi tea, to soothe asthma and bronchial conditions. For a cold mix 1 teaspoon ginger, cinnamon and mulethi powder to one cup of boiling water, add honey and drink this mixture 1-2 times a day.

Mulethi reduces testosterone levels in women suffering from PCOD, thereby increases chances of conception. The estrogen like properties of mulethi combined with its anti-spasmodic properties make it a remedy for menstrual cramps. Mulethi tea which is a hormone regulator is also recommended for those suffering from menopausal symptoms.

Mulethi has anti-viral, anti-inflammatory & anti-bacterial properties; it maintains mucosal health of the digestive tract, relieves constipation, prevents gastric and peptic ulcers. Drink tea made from one teaspoon crushed mulethi & one teaspoon jiggery steeped in one cup of boiling water for 3-5 minutes.

7.Mulethi For Diabetes:
The licorice root powder contains a potent phytoestrogenic compound called glabridin which not only imparts the sweet taste to the root but also plays a crucial role in assuaging the blood sugar levels of the body. The production of insulin from the β-pancreatic cells becomes active in the consumption of mulethi powder. Adequate dosage of the powder also helps to reduce the breakdown of starch into glucose and hence manage diabetes.

How can you use mulethi (liquorice)?

All you need to do is to boil the root to make a tea if you are feeling nauseous or are coming down with a cold. Liquorice tea is also good for maintaining dental health; try gargling with the cooled tea.

We are agriculture based company situated in mumbai with experince of more than 15 years.we deal in Natural agri commodities,herbal and ayurvedic products